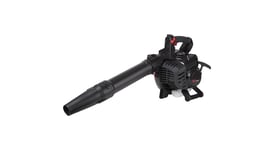 Your leaf blower engine needs gas, compression and spark. First, make sure there's fresh gas in the tank—old gas accumulates water and burns poorly. Replace the fuel if it’s old. Add fuel stabilizer to the gas when you refill the tank to help keep the fuel fresh.

If the fuel is fresh, complete the preventive maintenance on the air filter to make sure the carburetor gets air to mix with the fuel to start the engine. Follow the instructions for in your owner’s manual for cleaning and maintaining the air filter. Lightly coat the air filter with oil on some leaf blower models so the right amount of clean air enters the carburetor.

If the fuel lines are okay but fuel doesn’t move through the lines when you press the primer bulb, the fuel filter may be clogged. Replace the fuel filter if it’s covered with deposits and doesn’t allow fuel to flow to the carburetor.

Finally, to check for compression, remove the spark plug, press your thumb over the opening and pull the starter cord. If you don’t feel air pushing out from the cylinder, it’s likely that the piston rings need to be replaced. (For an accurate compression reading, use a compression gauge.)