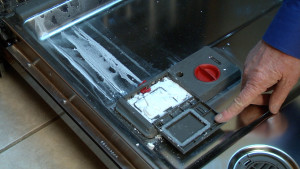 Hi, Wayne here from Sears PartsDirect. Today we're going to talk about what to do when your dishwasher dispenser won't dispense detergent. Many dishwashers use a detergent dispenser with a cover that flips up during the cycle, like this one. When the dishwasher door is shut, the cover presses against the top dishrack so the lid doesn't open fully, allowing spray from the lower spray arm to flush detergent out of the cup. When you open the dishwasher door, the cup cover flips open—you can hear it pop.

Another reason soap might still be in the dispenser is the spray arm couldn’t get enough water into the dispenser to push all the soap into the tub—usually because something is blocking the spray path between the lower spray arm and the dispenser. When loading the dishwasher, leave the path clear so plenty of spray reaches the dispenser cup.

Stale powder detergent can also get stuck inside the dispenser cup, because the caked powder won't dissolve as easily in the water. Replace your powder dishwasher detergent if the powder clumps together easily.

If the latch works and you aren't overfilling the cup, then the dispenser actuator may be broken. A wiring failure or a defective electronic control board could also prevent the cover from opening.

With your multimeter set to measure resistance in the 20,000-ohm range, touch one meter probe to each dispenser prong. You should measure between 1,400 and 2,800 ohms of resistance through the actuator. If you measure infinite resistance—on this meter that's a 1 in the far left corner—replace the dispenser assembly because the actuator isn't allowing current to flow.

Still not working? It's time to call a technician

Have a service technician examine and repair the dishwasher in this case; the technician can perform live voltage checks to see if the electronic control board is sending voltage to the dispenser actuator. Those checks should only be performed by someone with proper training.

I hope this video helped you out. You can find links to the parts we talked about in the video description. Check out our other repair videos here on the Sears PartsDirect YouTube channel. Subscribe and we’ll let you know when we post new ones.

Symptoms common to all dishwashers

Repair guides common to all dishwashers

These step-by-step repair guides will help you safely fix what’s broken on your dishwasher.

How to replace a dishwasher vent and fan assembly 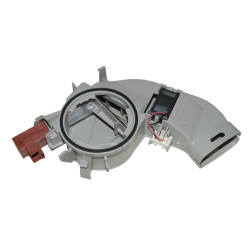 If the control panel goes blank, the fan could be to blame. Replace the vent and fan assembly using these steps.

How to replace a dishwasher circulation pump and motor assembly 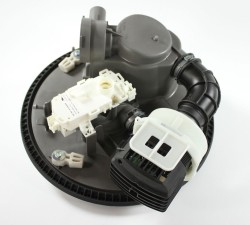 When the spray arm won’t spray, you might need to replace the circulation pump and motor assembly. Here's how.

How to replace a dishwasher water inlet valve 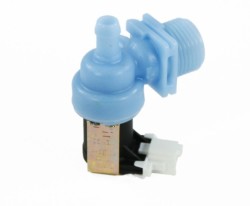 If your dishwasher fills constantly or won't fill at all, the water inlet valve has failed. You can replace it in about half an hour.

Articles and videos common to all dishwashers

Use the advice and tips in these articles and videos to get the most out of your dishwasher.

How to load a dishwasher video 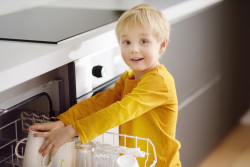 Find out where dishes should go, as well as what never to put in a dishwasher.

Overloading the detergent dispenser, using clumpy soap and a broken actuator are reasons why the dispenser won't open.

How to fix rust spots on a dishwasher dishrack video

It’s easy to get a newer looking dishrack!